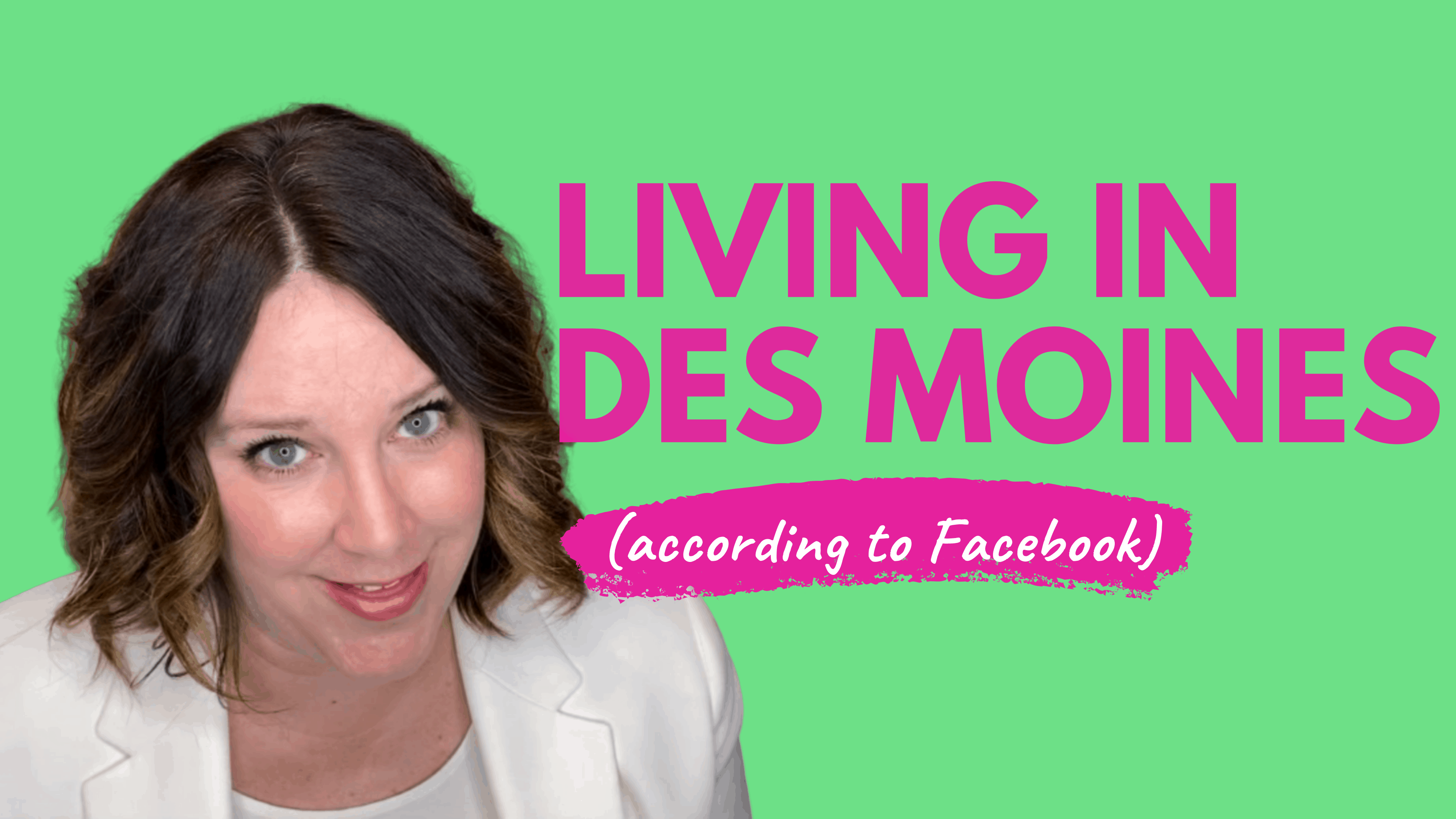 Recently I posted a video with my 10 reasons why you should consider moving to Des Moines. (You can watch that HERE.)

Anyway, I thought I should find out if I was missing any reason. Naturally, I polled my Facebook friends asking what they love about living in Des Moines, and these are their results.

Hi, I'm Heather Wright with Remax Concepts. I'm a Realtor in the Des Moines area and I would love to share with you why my Facebook friends love living in Des Moines.

Similar to the video I posted recently, traffic was one of the pros about living in Des Moines. Although some of us who show houses around 5:30 at night, are sometimes wishing we gave ourselves extra time to get to our appointment because while rush hour is not very long in Des Moines, it's still kind of busy.

Several of my friends commented on how much they love the FOOD in Des Moines.  Special shout out to Ohana Steakhouse from someone who moved to Austin really misses that restaurant.

A friend of mine who lives in LA now really misses B-Bop’s. For those of you who are not familiar with B-Bop’s, it is a local fast food chain.

People commented how much they love Court Avenue. There's a lot of restaurants and bars on Court Avenue, where you can make it a whole evening and just hang out and chill, eat good food, have a few cocktails.

A few of my foodie friends commented how much they love the foodie scene, and how there's always new restaurants coming up. And there's never a shortage of places to try.

The East Village was brought up specifically because it's pretty cool and a fun place to shop.

Someone even mentioned how they love the variety of sporting events. So if you're from a city that has professional league football, basketball, baseball, whatever the case may be, you won't necessarily find that in Iowa, but you will find sporting events that offer the same amount of fun.

No matter which direction you look, you're going to see something beautiful.  Whether it's the beautiful cityscape driving down Indianola road or if you're flying home into the Des Moines airport, you'll look down and you'll just see a city filled with trees.

Several people mentioned the low cost of living and it's true. Des Moines is an affordable place to live. One person said she gets to take herself on vacation a couple of times a year, because she can afford to because of her low cost of living. What a great thing - Live in Des Moines and travel the world!

Others mentioned the music scene.

The sculpture garden downtown apparently has a ton of Pokestops for those interested in that.

Another person had moved away to North Carolina for a while and really missed the Hy-Vee restaurant and bakery. So that might be something you would enjoy if you lived in Des Moines.

Other things that were mentioned were Anderson Erickson dairy products, the theater, historical homes, and engaging political climate and the bike trails.

THE WEATHER (NOT AS MUCH)

There were a couple people who were a little down on the weather. Now mind you, I posted this poll in January and we've gotten a lot of snow this month.

One person commented that he loves living in Des Moines nine months of the year. Okay, I get that, and that might be a sign that he's a really good candidate to be a snowbird.

Last but not least, it was commonly mentioned in this poll that the best thing about living in Des Moines, Iowa, is the PEOPLE.

One friend said that whenever she travels away from home (home being Des Moines) that she realizes what she loves the most about Des Moines is definitely the people. And I have to agree because... Iowa Nice, it's pretty amazing.

That's it! Now you know it's not just my opinion that Des Moines is an awesome place to live.

Thanks for watching/reading! I try to produce a new video each week. Hopefully I can answer all of your questions about Des Moines.

The Truth About Zillow Pre Foreclosures

Selling real estate for the last 10 years has helped me become an amazing remote worker. I can work...

My Basement is Flooding What Do I Do?

What are the effects of low interest rates for homeowners?